The veteran television correspondent began her program by noting that Kristallnacht, the infamous night of vandalism and slaughter committed by Nazi brownshirts against German Jews, occured 82 years ago this week.

“It was the Nazis’ warning shot across the bow of our human civilization that led to genocide against a whole identity. And in that tower of burning books, it led to an attack on fact, knowledge, history and truth. After four years of a modern-day assault on those same values by Donald Trump, the Biden/Harris team pledges a return to norms,” Amanpour said.

Ben Habib, a former member of the European Parliament for the UK’s Brexit Party, dismissed the incendiary monologue as “third rate rubbish,” while others marveled at how the CNN host could make such claims with a “straight face.”

This is ⁦⁦@camanpour on⁩ ⁦@CNN⁩ comparing Trump’s tenure to Nazi Germany. How the hell is this sort of prejudice tolerated on mainstream media?

And she did that with a straight face. Impressive. Lmao

Numerous observers noted that it was ironic that CNN, which spent years pushing debunked conspiracies alleging secret Kremlin ties to Trump, was broadcasting lectures about the assault on “truth.” One blue checkmark argued that CNN should retract Amanpour’s “egregious demagoguery.”

Lowest of low. They believe their audience is stupid, and ya half wonder if they’re right.
This type of egregious demagoguery should be illegal and CNN should retract this garbage

CNN preaching about “fact, knowledge, history and truth” is really quite something.

Some on social media came to Amanpour’s defense, however. “So you don’t see any similarities between the way Hitler turned Germany into an authoritarian state and what Trump is trying to do now?” wrote one Twitter user.

So you don’t see any similarities between the way Hitler turned Germany into an authoritarian state and what Trump is trying to do now? Because if not, how do you explain how ordinary German people fell under his spell?

Amanpour is far from the first person to suggest that the president is a modern-day Hitler. Trump is routinely described as a Nazi by celebrities and pundits, with many of his supporters receiving similar treatment. 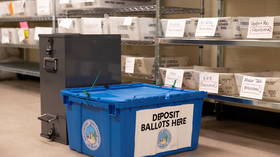 Even government officials have participated in the questionable name-calling. A resurfaced tweet from Arizona Secretary of State Katie Hobbs referring to Trump’s “neo-Nazi” base has raised questions about whether she can reliably certify the state’s votes.