Look who’s back: Biden could tap Hillary Clinton to serve as US envoy to UN

The name of the two-time presidential hopeful has come up in private discussions about who should fill one of the most senior diplomatic posts, according to the Washington Post, citing a person familiar with the matter.

Her appointment would likely be highly controversial. The 2016 Democratic nominee became a #Resistance hero after her defeat by Donald Trump, which she claimed was due to debunked allegations of Russian “collusion.” Others view her as a malignant force within the Democratic machine, whose tenure as secretary of state during the Obama administration was mired by foreign policy mishaps and domestic scandals, including allegations that she used a private email server for official State Department communications. 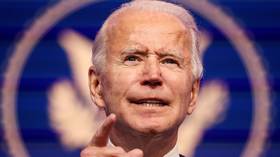 Her critics have pointed to her prominent role in NATO’s military campaign in Libya in 2011. She infamously laughed while discussing the grisly extrajudicial killing of Libyan leader Muammar Gaddafi, boasting: “We came, we saw, he died.”

For months, rumors spread that Clinton might even consider running again in 2020. Reports emerged of her building ties with several Democratic candidates’ campaigns.

Biden, who declared himself president-elect on November 8, announced that Ron Klain, a trusted campaign adviser, would serve as his chief of staff. The former vice president is screening candidates for other top positions in his administration, according to media reports.

CNN reported yesterday that Susan Rice, who served in the Obama administration as UN ambassador and national security adviser, was being considered for Secretary of State. Rice, like Clinton, was an outspoken proponent of the baseless theory that Trump’s campaign had ties with Moscow. She was also an outspoken advocate for the US-led intervention in Libya, which plunged one of the most prosperous nations in North Africa into anarchy. Rice was similarly supportive of major US involvement in Syria.

Trump has refused to concede the election and has blocked Biden from receiving intelligence reports as the Democrat prepares to transition to the White House. The Republican incumbent has launched a series of legal challenges, insisting that the election suffered from widespread vote fraud connected to mail-in ballots that tipped the scales in Biden’s favor. Election officials in several battleground states have denied that there is evidence pointing to foul play. Biden’s campaign has reportedly threatened legal action if Trump does not cooperate with the transition process.

Read More: Look who’s back: Biden could tap Hillary Clinton to serve as US envoy to UN