The meme that kicked it all off appeared sometime on Tuesday or Wednesday, showing a “learn how British taxes are beneficial for society” label on a mock-up of a tweet by Paul Revere, with the famous quote attributed to him, “The British are coming!”

Revere was the rider who warned the Massachusetts colonists in 1775 that British troops were being sent to suppress them, ahead of the skirmishes at Lexington and Concord that would begin the American War of Independence.

The widely shared meme soon inspired others. There was Apostle Peter’s claim about the resurrection of Jesus, using “Twitter for Stone Tablet,” being “disputed by official fact checkers…”

…And Marie Curie being slapped down by the “FDA” over having any doubts about the health benefits of radium, even though it was long-term exposure to radioactivity that led to her death. 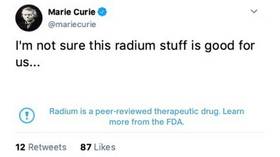 Another meme making the rounds proclaimed that the “generous Greek peace offering is safe and secure” – mirroring the tags about mail-in voting – under a “Twitter for abacus” post by Laocoon, the Trojan priest who famously warned the city against bringing in the big wooden horse left at their gates.

According to legend, Greek warriors hiding inside the horse then helped their compatriots sack Troy, ending the 10-year siege. 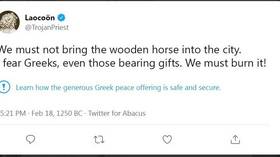 Perhaps the most meta one appended a “This claim about arithmetic is disputed” tag to a simple statement that 2+2=4, referencing an actual debate in the “social justice” community earlier this year.

Twitter has obsessively flagged anything election-related as “disputed” if it doesn’t entirely reflect the calls made by mainstream media outlets.

Lest they be outdone, other social media platforms have started placing election “facts” under completely unrelated posts by President Donald Trump, from his birthday wishes to the US Marine Corps to his wreath-laying at Arlington National Cemetery for Veterans’ Day.

Oh, look. They're doing this again. What the hell. Who's obsessed here? pic.twitter.com/eDR66cawGL

The Cast Of "Jingle Jangle: A Christmas Journey" Finds Out Which Characters They Really Are